Select a Page:
Scroll to top

African Start-Up follows entrepreneurs in various countries across the continent to see how they are working to make their business dreams become reality.

(CNN)It’s bespoke, beautifully formed, and changing the face of transport in Ghana. The bamboo bicycle is gaining traction in the country and one organization is riding this popularity wave to increase youth employment in the process.

Booomers International is a social enterprise training rural Ghanaian communities in the art of bamboo bicycle manufacture to provide an economic freedom many of them have never experienced.

“We were looking at how we can engage the youth in the right areas into a meaningful venture,” says company founder and CEO Kwabena Danso, who last year launched Booomers as a subsidiary enterprise of a development organization called Yonso project. “[I've been] engaging them in the bamboo bicycle business.”

Bicycles made from bamboo have been around for more than a century but demand has only increased in recent years, in part due to the reintroduction of the concept by renowned bicycle designer Craig Calfee in 1995. Calfee went on to form Bamboosero, a Californian company dedicated to increasing the uptake of bamboo bicycles, particularly in developing countries, and today a number of companies across Africa are seizing the opportunity to make use of this abundant, natural resource to create a boom in bicycling. It’s tensile strength and environmental sustainability make bamboo a highly desirable material. 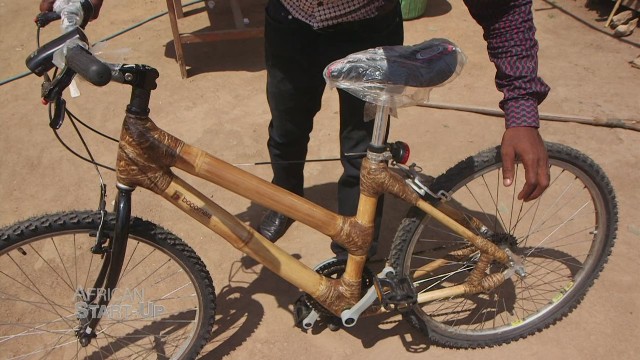 Bamboo bicycles take off in Ghana

“We do bamboo bicycles, bamboo bicycle stands and bicycle baskets for now,” says Danso and their biking portfolio includes road, city, and mountain bikes in both male and female versions. “Each bike is purely handmade…once you get your bike nobody else in the world has it.”

Whilst there are bikes being crafted by other manufactures in Ghana, at the root of Booomers lies not only innovative design but a social conscience with climate change mitigation and rural poverty alleviation among their primary goals. Danso takes his rural youth teams through the entire manufacturing process — from the harvesting of bamboo through to the final assembly of bespoke bicycles — to ensure they’re equipped with a diverse skill set. Some apprentices have had the pleasure of being trained by Calfee himself. “We managed to get him to come down to train people,” says Danso.

Danso knows the challenges of manufacturing in rural Ghana well, including low capital, high production costs and unreliable electricity sources. “Sometimes you come to work for two days and there is no light,” Danso says. “That’s a really big problem to manufacturing in Africa.”

But despite such limitations he is determined for his bicycles to travel the globe. “In the next five years we want to conquer the world,” he concludes. His wish is for Boomers to become a resource not only for bicycles, but also furniture, household items and even houses made of bamboo. “We want to make this place the point where you come and get everything from bamboo.”